UK athlete Robbie Britton made a great leap forward with his World Bronze medal at the IAU 24 hour World Champs. In this interview, the Profeet Ambassador talks about his love of running, what drives him and offers tips to any runner – experienced or aspiring.

How did you get into running?
Back in 2009 a friend of mine signed up for a marathon, the Windermere Marathon, I signed up as well just to shut him up a bit. After that it just spiralled out of control. London to Brighton was next, it started in my home town and finished by the beach so seemed like a great idea.

Beforehand I just played team sports, mainly football, some rugby (as a front row forward) and American Football. I was never that good at any of them but made up for that by running around a lot.

When did you realise that Ultras were the events for you?
The further I ran, the closer to the front I got and everyone loves doing well at something? Right?  I just wanted to find out how far I could push myself, picking longer and tougher races just to see if anything could grind me to a halt or destroy me. I quite enjoyed the 100 mile plus events, those seem to suit my warped sense of humour. 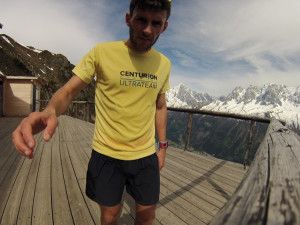 What mileage do you run and what kind terrain do you like best?
I prefer not to think about mileage and look at time instead, probably getting 10-14 hours of training in a week, ranging from 30 minute easy runs up to a 2-3 hour long run at the weekend. I’m not a fan of really long runs, I think it tires you out too much and you can’t get the consistency that’s important.

As for terrain, I’ll run on trail as much as possible, although I do love a track session once a week to unleash some real pace. Chamonix has a nice 300m track where you can pretend you are David Rudisha running WR pace laps whilst looking at a glacier.

Can you describe your favourite ever run?
Up until recently that would have been a difficult question but having won an Individual Bronze and Team Gold at the World & European 24hr Running Champs in Turin with a 261km (162 mile) effort tops everything. The last hour, averaging sub 3 hour marathon pace, overtaking and gaining on those in front of me, felt awesome. Really awesome. It gave me the belief that I can win the event in the future. 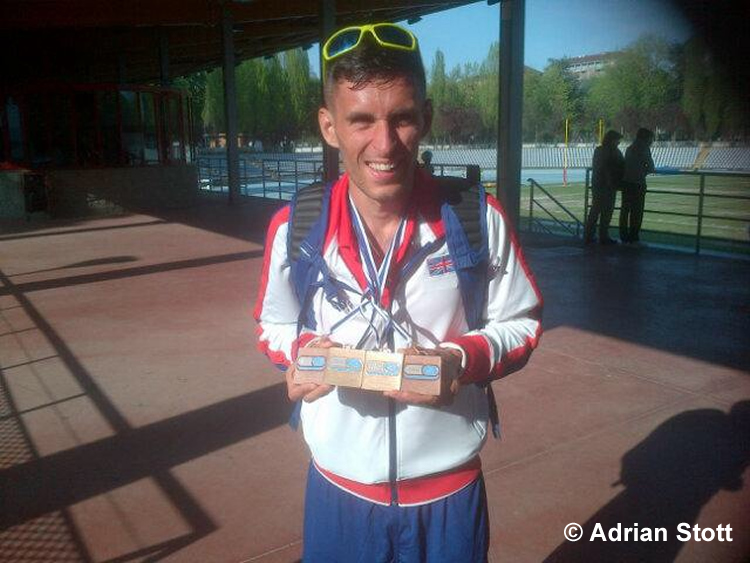 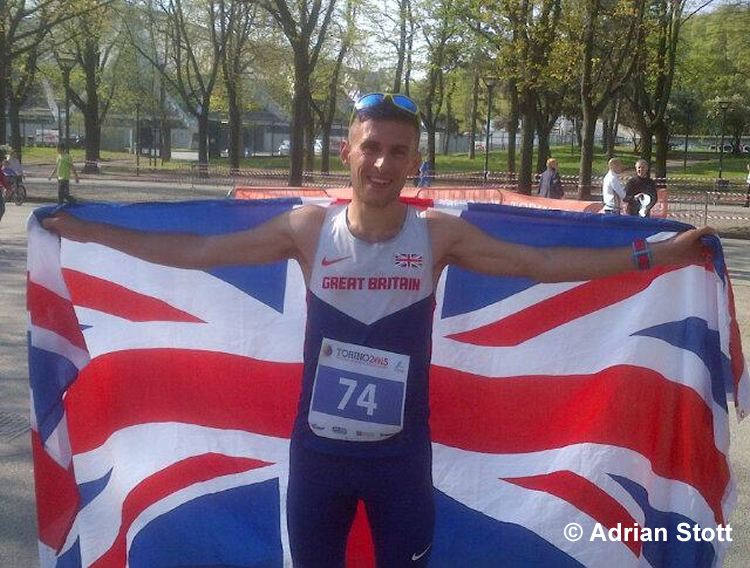 Many people see you as a positive role model after speaking out the damage of drugs in sport. What do you feel your recent podium protest at Turin 24-hour has achieved in relation to this?
I didn’t want to detract from the awesome ultra running team we had travelling to Turin but I was happy that it got people talking.  People make mistakes, we are only human. I would rather look at what caused someone to take that path and how we can prevent this happening in the future than pour scorn on those that have gone array. Companies like Nike should be leading the way for clean sport instead of championing people who took shortcuts.

2015 is a pretty full on year for you with the UTMB is you main focus. Where and when do you think Byron Powell (iRunFar.com) will have to interview you?
Haha, I have no idea when that will happen or what I have to do. I think Bryon’s a bit worried that after that interview it’s all going downhill for him, nothing will be as much fun. So he’s playing hard to get, but I’ll get him.

How important is rest for runners?
Rest is one of the most important part of a runner’s lifestyle. I firmly believe that you don’t over-train, you just under-rest. If I’m not training I’m thinking about rest and recovery, which includes nutrition.

Nobody gets stronger by running up a hill, it’s afterwards, when your body adapts and recovers, that you become a better runner.

Where do you draw your inspiration from?
From so many places and not necessarily sport. Anyone who works hard towards a goal, makes it their main objective in life, is someone you can learn from.

When I’ve got my head buried in a book it can range from mountaineers and polar explorers to cyclists, runners and any other sportsmen or women. Not only can these people inspire you but you can learn from them. Ultra running has a history that many don’t know much about but it’s there to read about so I want to learn as much as I can from that, from the marginal gains attitude in cycling, the resilience & endurance of polar explorers to the lightweight, revolutionary buy ambien drug, buy phentermine pills ways of Alpinists and Big Wall climbers.

If you think you’re tough doing an ultra marathon then read about Walter Bonatti, Doug Scott or Cherry Apsley-Garrard, they were/are tough bastards. Doug Scott crawled off the Ogre for days with two broken ankles.

How do you get through the highs and lows of ultra running?
Expect them and enjoy them. Anyone can run well when they’re feeling great but to make solid ground when you feel shit is how you out together a great ultra running performance.

The highs also have to be watched, fly too hard too early in the race and your body will suffer later on. I pushed too hard about 130km into UTMB last year, thinking “there’s only 38km of mountains left” and I paid the price quite soon afterwards, stumbling up to Tete aux Vents and crawling across a boulder field.

What tips would you pass on to fellow runners?
Enjoy what you do, but not just the races, the whole process. Training is a wonderful thing and driving hard in a hill session, at night in the rain, can be a brilliant moment if you think about the benefits you’re getting.

Get to a start line feeling fresh, rest more and don’t get obsessed with mileage. There is only so much your body can take, build it up year on year and look at how you’ve improved and not how much less mileage you’re doing than Winston on Strava or Facebook. Winston is a liar, picks less competitive races to get his V90 wins and will blame “last week’s 50 training miles” when you cruise past him.

What’s the best running advice you’ve ever been given?
“It was impossible, then I did it, so it was possible” is something I paraphrased from Walter Bonatti’s Mountains of my Life.  Don’t let anyone tell you something is impossible, just figure out the first step and take it. I have plans that many would say are impossible, but I’m moving in the right direction and getting closer to my objectives. Just believe in yourself.

When I started it was trial and error for everything, I just went running, but because everyone is against the course first, then each other, you learn an awful lot from the people you run with. Even at the World 24hr Champs in April, Oliver Leu, one of the German team and a very experienced ultra runner, was giving me advice during the race and it is just one example of the great friends I have made through ultra running.

What would you say to anyone thinking about taking up jogging/running?
Just get out and try, walk if you have to but give it a go. Run for a minute and walk for two if you have to but put those feet on in front of the other and go for it. My first running shoes costs £12 from Aldi but it has changed my life for the better.

Join a club, find a park run or just hit the streets on your own. You won’t regret it.

You seem very relaxed, where does that steely competitiveness come from?
I’m very relaxed and chilled most of the time, it’s the best way to live life. Keeping happy is a big concern of mine. As for the competitiveness, I absolutely love to race and compete with other people. I’ve been involved with sport from a young age and have always given everything so I guess it comes from that. My Dad was a competitive fisherman but I don’t think that’s it.

I will say that even though I come across as very chilled on race day I’ve done everything I can to defeat my opponents. What’s more demoralising than getting encouragement from the chap breezing past you? 😉

What is your favourite race food and why?
I’ve been enjoying making my own food, such as rice cakes with cashew butter and jam. Or sweet potato brownies – but Mr. Paul Navesey usually makes them! They really help with slow release energy that is easy to eat and digest mid race. Also Sour Skittles are awesome, but I am a giant child in that respect. Sweets are my main weakness, but that’s better than my old vices…

Robbie’s in good company here with his love of rice cakes – this is the Team Sky rice cake recipe. Here’s a great sweet potato brownie recipe too. I’ll be giving both of these a go 🙂  For other fuel food click here.

Thanks very much Robbie. Good luck with the rest of your season and “go easy now” 🙂