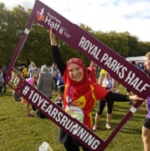 Smashing Stereotypes: One step at a time

You run, you’re a woman, you wear a hijabi… you may have to overcome stereotypes.

In this enlightening interview, Lynne AKA “Jogonhijabi”, talks about the importance of running and joy of #Parkrun.

How did you get into running and why?

I have always enjoyed regular cardio exercise at the gym however never ran outside until I signed up for a 5k Race4Life in March 2015. I was motivated to join the Pink Army as I liked the idea of all ladies together running for such a great cause. I had recently lost my Nan to cancer and whenever I saw a advert for cancer fundraising I would start to cry so I decided to raise money and and run in her memory. I was going through a stressful period in my life then and despite starting my training in December 2014 I loved being outside running through my thoughts. 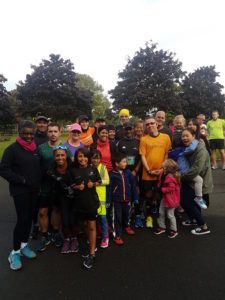 What has running given you?

I soon found that running was a great stress relief and helped me work through some difficult emotions.  I had also been diagnosed with stress-related high blood pressure and found running helped alleviate the psychological distress on https://www.clinicaltrialsbc.ca/valium/ in turn improved my over all physical health and have not suffered with the physical symptoms of prolonged anxiety since. In Feb 2017 I joined a running club, Dagenham88 Runners, and discovered a whole new world. Having been consistently a lone runner, I was amazed to find such a varied community of people. The social aspect of running has further helped me to beat periods of low self-esteem and fluctuating moods. I have never met such a huge expanse of people so encouraging and positive that it lifts self-belief ten-fold. Runners have also helped me to have hope again in human nature whereby I have witnessed such great acts of kindness, selflessness and support.

What have you given to running?

Having experienced this support from other runners I like to give back what has been given to me. I have volunteered at Parkrun, cheered on the sidelines to other runners during races and turned up to track night when I am injured. I have run with runners when they are struggling at the back and kept them company so they could finish. A lot of running is about the psychological strength we need to get through to the finish line. Friendly, kind words of support work wonders in getting us there. Words and smiles cost nothing. I organised a 5km walk/run in my local park to raise money for charity and the majority of participants were non-runners. It was wonderful to support them and encourage them and praise them for their great achievement. 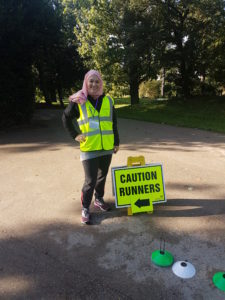 What do you love about Parkrun?

Parkrun really sets me up for the weekend. It is worth sacrificing a lie-in. Far more happy endorphins are produced staying active and meeting positive people than lying in bed. I love the fact people of all abilities and backgrounds get together globally each week for the mutual love of running and being healthy. The first day I went to Parkrun I did not know anyone but was quickly taken under the wing of the marshalls of Barking Parkrun and became newly adopted as one of the family.

You’re smashing stereotypes, what drives you in this?

The common stereotype about Muslim women who wear hijab (scarf or other coverings) is that we are weak, oppressed and have no voice. I want to show the world that on the contrary, we can be strong, self-assured and community spirited. While many might perceive that hijab holds us back, I want to demonstrate that it can be the powerful force that helps us reach our potential and beyond. Finding our true self is the ultimate goal for individuals. If a Muslim woman loves to wear hijab as part of her identity and she can go out and make a difference in this world then that is beautiful and she symbolises a purposeful life. Criticisms have been that hijab prevents integration in the UK and other populations. I hope to show that hijab does not get in the way of building and maintaining relationships in our society.

How else can we #empowermuslimwomen?

We live in a world where, sadly, there are some individuals and groups that want to divide up humanity. Radical antibiotics medications groups and hate crimes seek to destroy humanity. Muslim women who wear hijab make up the largest group of victims of racially and religiously motivated hate crimes. I started the hashtag #runtogetherstandtogether because I believe strongly in unity. I want to live in a world where we don’t just live side by side in peace, but hand in hand. We all have so much to offer each other. When the world sometimes feels like it is falling apart I want to show that the running community has a lot to show the world about how we come together.
Who are your role models?
I take inspiration from the slowest of runners to the fastest, the newbies to the elites. Every runner has something to learn from. Their persistence, determination and courage. My first role model however was marathoner Rahaf Khatib in USA, who was the first hijabi runner to appear on Womens Running Magazine. She has raised thousands of dollars for refugees. Here in UK, I learnt about Haroon Mota who last year ran 4 marathons in 3 weeks to raise money for water well projects with Penny Appeal. I got in touch with him and he has since offered me a place in the London Marathon to also raise money for Thirst Relief in Gambia and build a water well in a village that currently has no access to water.

Have you ever experienced negative stereotypes while running?

When I run alone in the parks I do on occasion get looked up and down and a face pulled as though in disgust, and these are usually from elder generation Muslim women. 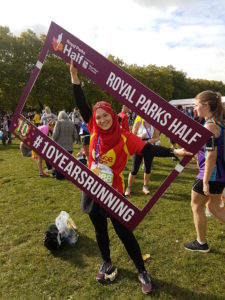 How do you handle it?

This is partly, where my alter-ego name comes from. I would say to myself “well they can jog on”. Running is like a medicine for my mental well being as part of a more holistic lifestyle. It is my way of finding spirituality in my life and working through my emotional difficulties. I won’t allow the opinions of others to get in the way of my medicine. A few years ago my self esteem was so low I would have allowed it to effect me. Running has helped me be self caring enough to let comments and facial expressions bounce right off. Also during the Great South Run, I bumped into a Donald Trump supporter who was dressed as his icon. I filmed a short video running with him, calling out my message about unity and promoting my hashtag. Someone shouted out disgruntedly, “You sound like Jeremy Corbyn” but I took that as a compliment.

Fundraising for Gambia how can people help?

The aim is to build at least one water well. I am continually coming up with new plans to raise money, organising events, meet ups, get-togethers. If you follow me on Twitter, Facebook and Instragram under my name Jogonhijabi, you can stay up to date with my events and help me promote as well as attend them. I have an afternoon tea, Ladies night, Mens dinner and paintballing all coming up. Please follow me and share my journey to London Marathon and help me raise my £5,000 target by providing moral support and encouragement as well as donating on my JustGiving page www.justgiving.co.uk/jogonhijabi and help me raise awareness of the Penny Appeal Thirst Relief project, or you could text ‘JOGS97’ with £amount to 70070.

My main hope is to reach my fundraising target by the big day! The water well will make a huge difference to a whole community of people, changing and saving lives. Then I want to have as much fun on the day as I can and get to the finish line injury free God-Willing. If I can make it across within 5.5 hours I will be really happy but for me I have come to realise that if I am too hung up on time and go into my self in a competitive way, I might just miss out on opportunities to meet some amazing people and witness humanity at their inspirational height.

Lynne, thank you so much for reflecting on your running story with us. The very best of luck with Virgin London Marathon 2018 and your fundraising.