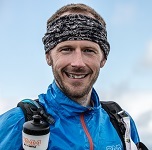 There will be tears…Damian Hall shares trail running experiences 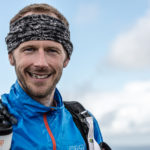 Damian, your friends say you’re “annoyingly cheerful”. How would you describe yourself?

Occasionally cheerful, always annoying? I’ve no idea. You’d have to ask other people. Oh wait, you did. Annoyingly cheerful it is then. Although, meet me 87 miles into a 100-miler and you’ll likely see a less cheerful side.

When are you at your most miserable?

In 3 words, describe your #SouthWestCoastPath FKT.

How cathartic were your ‘power sobs’?

They worked amazingly well. I felt emotionally refuelled after them and then usually had my best spell of running. They would only be five or 10 seconds at most, a mixture of chronic tiredness (I was averaging three hours’ sleep a night), anguish and guilt at being away from my children for so long. A quick dose of sweaty eyes and everything would feel okay again. I recommend a daily power sob to everyone. Read more at The Guardian.

You’ve said you were constantly rewarded by the generosity of strangers. Can you share a story related to this?

That was mostly down to the amazing Tom Jones (not that one). He was our crew man extraordinaire and I couldn’t have set an FKT on the South West Coast Path without him. He was so dedicated and forgiving of my lack of gratitude at the time. Anyway, he’s one of those people who just gets to know people, he likes talking to strangers. Often he’d be waiting for me up ahead somewhere and would get chatting and they’d learn what I was up to – and that I was fundraising too. When I turned up they would often put cash into my hand, or refuse to let me pay for hot food or a ferry ride. It was moving stuff and helped motivate me.

What’s next for @Damo_Hall then?

The Trail Running World Championships for the Great Britain and Northern Ireland team in Portugal in October. Then some time off, before probably another FKT next year and some more exciting challenges and ultra-distance races – TBC, but at the moment UTMB is still very much on my mind.

Why are you happiest running in ‘lumpy places’?

I’m just not so excited by flat races. I like lumpy stuff. I like going up things. Then down the other side. There’s just something about wanting to get to, and then getting to, the horizon, isn’t there? 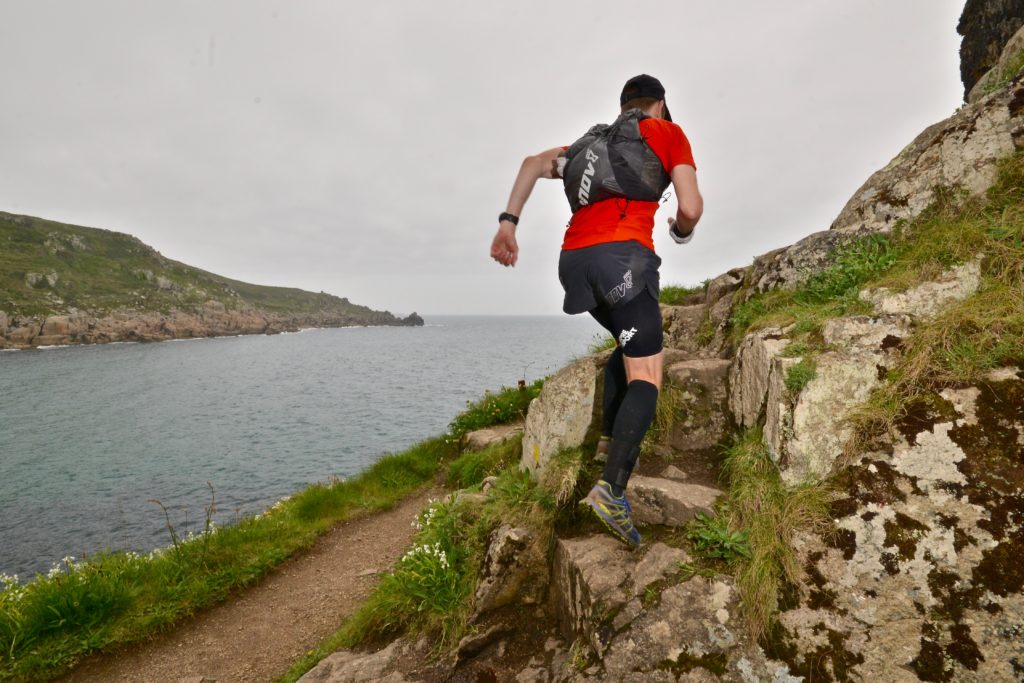 What does running give you?

From your 1st marathon in 2012 to elite Ultra runner 2016. Did you ever dream of coming so far in such a short time?

I still think people have got me confused with someone else when I see my name in the same sentence as the word “elite”. I don’t know where the line between elite and non-elite is drawn. I’ve never won an ultramarathon, but it’s flattering if people see me that way. I still feel like a newbie trying to suss this whole fascinating thing out. But the short answer is no, not at all. And I still don’t think I am one. 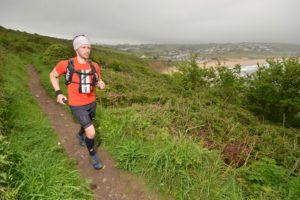 Run slow to get running fast. How and why is this?

GB international ultra runner Marcus Scotney coached me for a spell and he believes in training with a heart rate monitor. Simply put, according to the principles of periodisation, your training should start with a block of running in Levels 1 and 2 only, slowly building fitness without destroying it by running too fast. You add strength and speed later, but that period of slow running is key. It really worked for me in 2015.

How do you find running through the night?

I love it. Less so, perhaps, buy ativan now, five days into the Spine Race when you’re so tired you just sit down in the middle of the road to try and sleep but can’t because it’s too cold and then you start hallucinating that someone’s setting off Chinese lanterns to guide you the right way and you follow them but really they don’t exist and now you’re in the middle of a huge bog and deeply topographically befuddled and you might end up crying again. But usually, especially at UTMB when the stars are out and you’re in these huge mountains, it can be unspeakably wonderful. 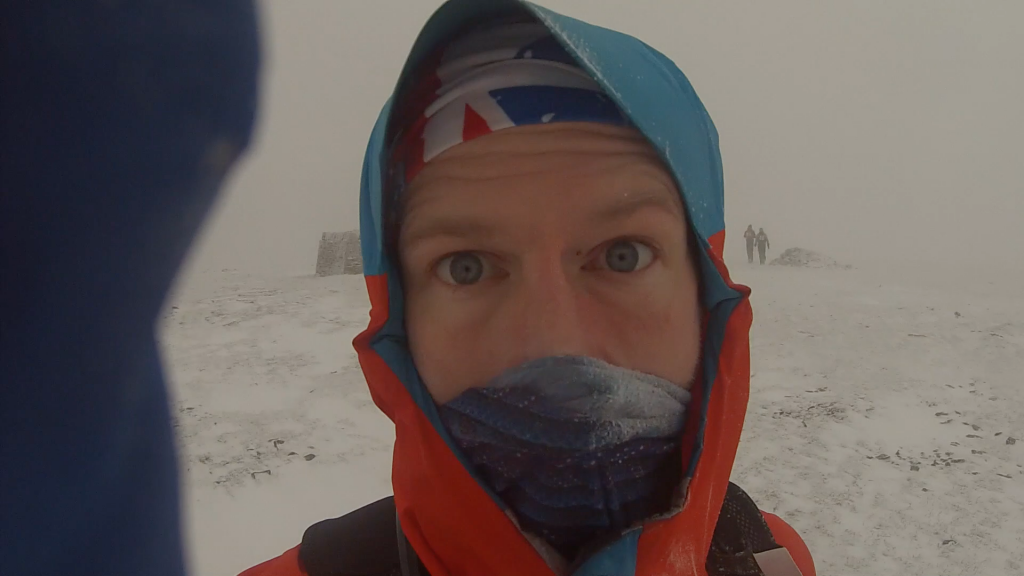 How does walking benefit your running?

My current coach Ian Sharman is big on this. I guess above all it’s building strength, if done on hilly terrain, something that again has really helped me. But also in most 100 milers, especially UTMB with 10,000m of climb, there will be a lot of hiking and that needs to be efficient.

Why is the horror and torture of ultra running so rewarding?

It’s like Fight Club. Running stupid distances (rather than punching each other) makes us feel alive, when for much of the time our lives are very safe, predictable and unchallenging.

You seem to have adopted a more thoughtful approach to your 2016 Ultras. What did you change and why?

I raced less, trained more specifically and did more strength work. I had raced too much and with perhaps too much variety in 2015 – great fun though. I changed things because I wanted to improve.

Nice! And your favourite running fluids?

Tea. I ruddy love tea. Chocolate milk. Smoothies. I loathe cola normally, but it can be good in ultras. Liquid calories are a great way to stay fuelled towards the end of longer races where eating sold stuff is unappealing. 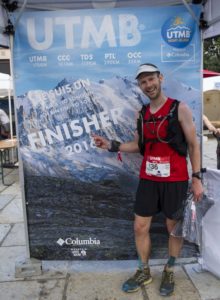 What is your favourite trail running memory?

Gah. So many. But it has to be finishing this year’s UTMB with my two kids – they had said they didn’t want to join me, but had changed their minds when I got back to Chamonix. It was well brill.

What have you learned from supposed ‘failures’?

I’ve been pretty lucky so far and would only really count one race as a failure, Lakeland 50 in 2014. That taught me not to undertrain, not to try and keep up with Kim Collison, to respect the heat and to steer clear of unmarked courses (unless they’re bona fide mountain marathons).

Your book “A Year On The Run” – any teasers for us?

Thanks for the plug. It’s an alternative history of human endurance, with some wonderful leftfield illustrations (not by me, by a proper artist dood). It includes legends like Emil Zátopek, Kilian Jornet, Yiannis Kouros, Lizzy Hawker, pedestrians, polar explorers and madcap folk who ran around the world. But also anecdotes about chronic misfortune, poison, big fibs, pre-race beer drinking and people who happily call themselves the Wily Wobbler. I love all that sort of stuff. 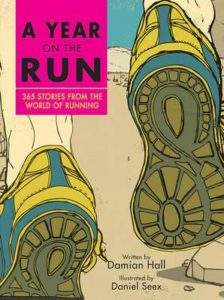 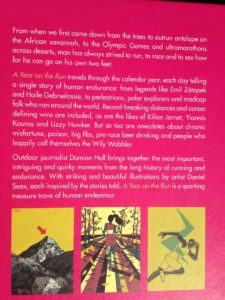 Jeez. Isn’t it meant to be nice easy questions at the end, you rapscallion? I’d love to say, inspiring my children. But if I wasn’t a parent I’d be running anyway, so that’s only half true. Hmmm. I don’t really know. It’s work for me. And it’s not entirely without ego, either. Plus I have a lot of running shoes and don’t want to see them go to waste.

So far it’s likely to be Marathon des Sables, a race about which I once said on Telegraph.co.uk is “incredibly expensive, more-famous-than-it-deserves-to-be, not all that demanding comparatively”. So I may well be eating some humble pie there. And probably UTMB again. I think I can do better. Though it might hurt more.

Damian is an ambassador for Contours Trail Running Holidays and for Inov-8 – the all-terrain running brand.

Thanks for sharing this!