This weekend saw a group of us heading up to Coniston for the Lakeland Trails marathon and half marathon.  Rated by Runners World as most scenic marathon in the UK, this course is awesome. I was entered for the half marathon which itself offers awe-inspiring vistas, rapid descents through woodland, camaraderie, and plenty of climbs 🙂

So it was up at 5am for a 6am meet to car share. I’d volunteered as driver because my 3 companions were doing the full marathon. (Didn’t fancy risking the driver cramping as we headed back down the M6 later!)  Some porridge and apple compote was my fuel of choice for the morning ahead.  I hadn’t done this event since 2010 when it was shorter. With Staveley and Hawkshead 17kms behind me I was really excited about Coniston. We’ve definitely been blessed with the weather so far for this series and yet again it was forecast for good: Barring the odd shower, the sun was out again. With a breeze on the day, it made for ideal marathon conditions.

Arriving in plenty of time to sign in, we each registered for our events. I had the pleasure of clapping and cheering 3 fellow Harriers off on their trail marathon quest. That gave me an hour to prepare for the half.  The atmosphere was maintained over many hours, mainly because of the mix of marathon and half marathon races and challenges. Having 4 full #trailrunning events, plus the kids run around Coniston Showground, all came together to make a party atmosphere. A final bit of inspiration came when bumping into Graham (Race Director) to congratulate him on his recent Bob Graham Round success. Read his amazing story here. 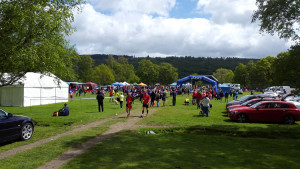 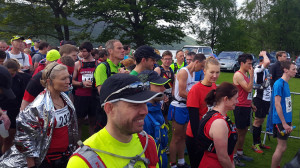 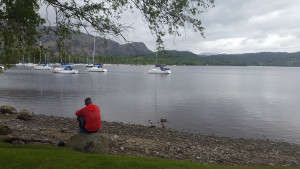 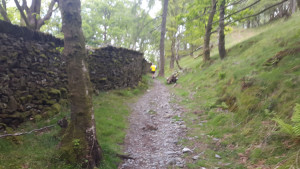 When it came to our 10am start time, I was raring to go. I’d decided to take it relatively easy for the first 5km to ensure my legs were properly warmed up for the climbs. I was pretty sure of seeing Pete Lashley steam out of the blocks early on – no doubt nervous of missing his 2.15pm gig slot!

We started with a lovely run out of Coniston Old Hall and through Coniston Village itself. Then it was on the bridleways, through National Trust woodland towards Holme Fell – a gorgeous opening to both routes. Then started the first proper climb of the day! It’s about 150m of ascent between 5km-7km past the old slate quarry before undulating through yet more terrific trails. 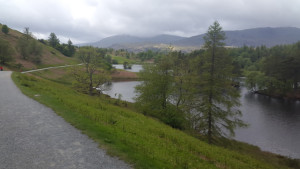 Because of the weather and remoteness of parts of the route, I’d decided to run with my minimal Ultimate Direction AK race vest. Stocked with about 1l water plus some energy balls I knew I’d be fine in emergency should I ‘bonk’. Nevertheless from 6km I took the opportunity to have a cup of water and a small chunk of flapjack at each feed station. My only disappointment was not seeing any of the promised bananas!

As we approached the 10km point, we headed towards probably the best vista of the day – the circuit of Tarn Hows. I took a few blurry pics while running – a bit shaky but! This was fab because as we looped around, runners could be seen strewn out all around the Tarn. 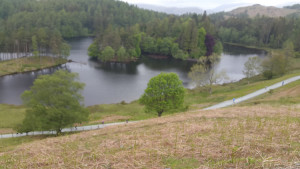 The spirit of fellow http://www.buyantibioticshere.com runners was superb – the leader whizzed past me on his 2nd loop and I wished him well. This was rewarded when for probably the only time in my running [ahem] career/hobby I started to lap people on their 1st loop. All was done with mutual smiles and best wishes 🙂

Tarn Hows was surprisingly but pleasantly undulating – superb! Branching off left we headed southwards and towards one of the high points (literally and euphorically) of Hill Fell trail. Here we topped out at 238m where James was taking photos – Tarn Hows the stunning backdrop. (We gleefully passed some poor sod who hadn’t realised he was supposed to loop the Tarn so doubled back!) 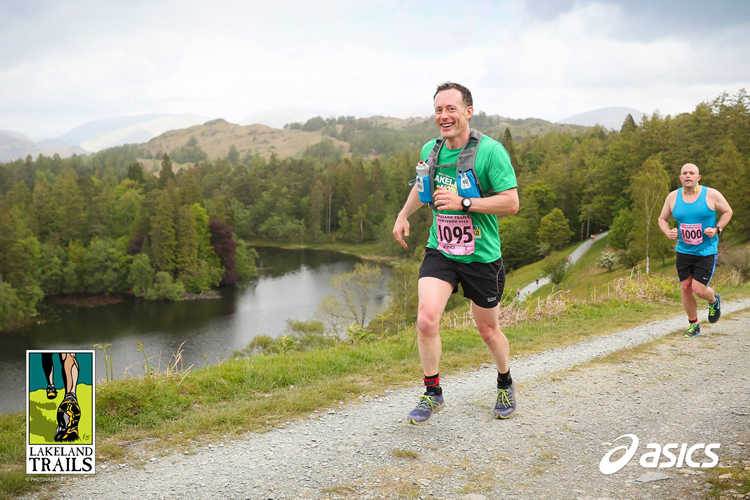 From around 14km we had roughly 2km pelt of 190m descent through woodland of such tranquility it was breathtaking. All you can hear is your own feet (light and fast honest!) cruising over the smooth, steep woodland trail. If there is anything that rekindles the joy of running, this is it. I for one couldn’t help but smile broadly during this section 🙂 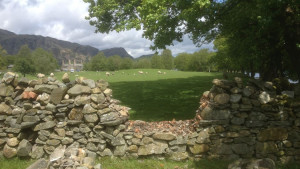 I’m still not sure of my endurance levels at all, so had kept a little back for the 4-5km run-in along the bridleway, past Coniston shoreline and return to Coniston Old Hall. All along this section Lakeland ramblers and kids were applauding us. This made for a natural energy boost as we returned to the showground for one cruel but cracking loop. No hitting a wall today either – we were able to literally run through it! Crashing through barriers and all that.

As with other Lakeland Trails events, spectators applauded enthusiastically which once again led to a sprint finish from me. Either I’m not trying hard enough earlier or I’m a show-off (perhaps both!)… 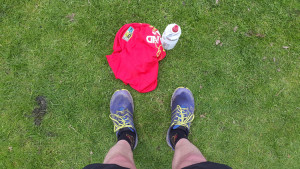 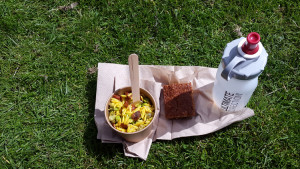 Anyway, I rewarded myself with a lovely energising mediterranean salad and ginger cake from Lancaster Soup Dragon. I was able to then get changed and relax to watch and applaud incoming half marathon and marathon racers – all inspiring in their own unique way. Some good shots of club mates too – including Mark cooling his feet in the Lake 🙂 All of us (Ian, John, Kay, Mark, Paul, Paula) had strong races. Typically I couldn’t resist joining them in a Hog Roast later as well! 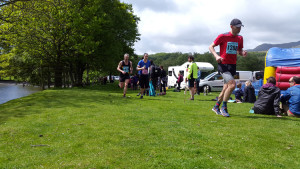 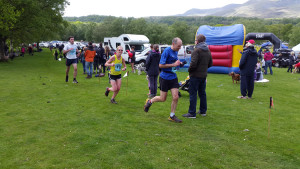 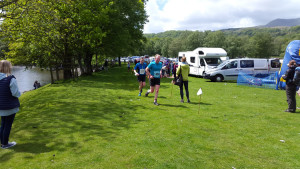 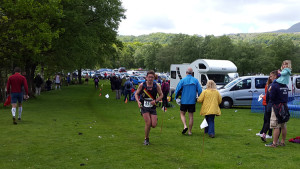 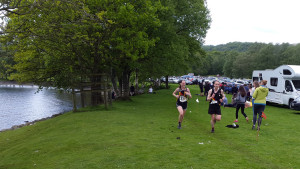 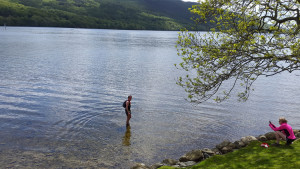 Every stall did a roaring trade due to the sun staying out and runners constantly returning to the finish. I enjoyed a bit of Pete Lashley’s set and then to cap a cracking day, we were amongst the prize-winners. Paula won the Vet 50 women – while in the prize draw, Kay won a ladies t and I won a World of Beatrix Potter family day! Could you ask for any more? Perhaps Stainers who would have won vet 50 men but for following another runner who’d taken a wrong turn! 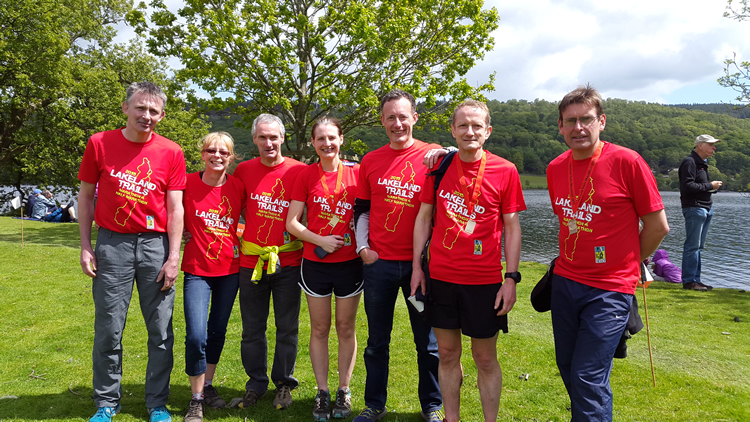 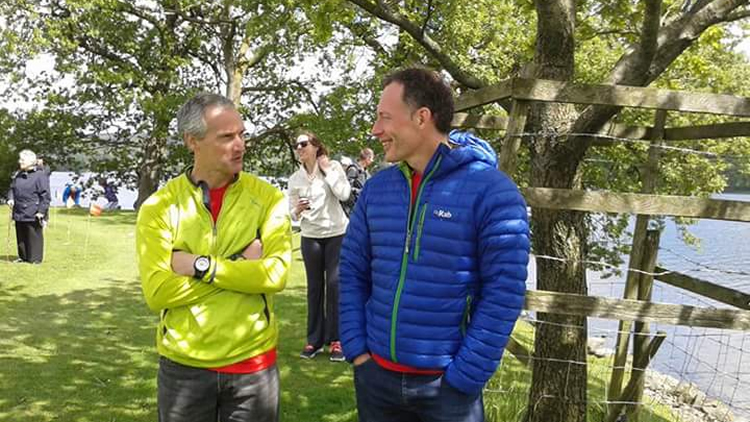 Now it’s onto the Rochdale Harriers 3 day event, before the Ultimate Trails 55km. Next few weeks will be nervous anticipation!

All volunteers, including marshals were again superb. Huge thanks to National Trust, local farmers, Coniston Mountain Rescue and Coniston itself!